Here are some interesting facts about the foundation of the Richmond Chapter which is celebrating over 30 years as a Chapter of the International Facility Management Association.

The Chapter’s Founding Members were: Tom Jarrett of the Computer Company, Ranny Robertson of Virginia Power, Rhonda Poindexter, of Bank of Virginia, plus Jere Dennison of Blue Cross & Blue Shield, John Gordon of A. H. Robins and John McElwee of United Virginia Bank. All were in attendance at this first meeting.[/caption] 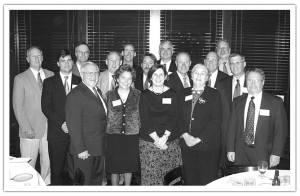 Below is a photo from our 20th Anniversary celebration at Maggianno’s on October 12, 2004. Four of the Chapter’s six founding members and 16 of the 19 Presidents attended and appear in the photo below.

The Richmond Chapter of IFMA has a very interesting history which is too long to publish on this page in its entirety. Special thanks to Bud Vye for his diligence in documenting our Chapter History.